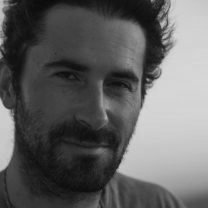 Agus Morales (El Prat de Llobregat, 1983) is a writer and director of 5W. He won the Ortega y Gasset award in 2019 with the chronicle "Los muertos que me habitan". He was a correspondent for the Efe Agency in India and Pakistan (2007-2012). He received his PhD in Language and Literature from the Universitat Autònoma de Barcelona (UAB) with a thesis on Rabindranath Tagore. In 2015 he founded 5W. Always sailing between literature and journalism, she has written about the return of the Taliban to power in Afghanistan, the Ukrainian exodus, the Indian culture and the refugee experience. He has collaborated with media such as The New York Times, The Washington Post and Gatopardo magazine.

He is the author of "No somos refugiados" (Círculo de Tiza), translated into English, Catalan, Italian and Polish, which was the recommended book for the Gabo Festival 2017. He has also published "Cuando todo se derrumba" (Llibres del KO, 2021), a non-fiction work about the pandemic, and the novel "Ya no somos amigos" (Temas de hoy, 2022).