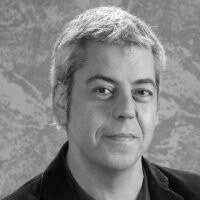 Head of Industry at DocsBarcelona and co Director of Festival Cine por mujeres. Former head of programming at DocumentaMadrid and Sevilla European Film Festival. He has worked as director of corporative and advertising videos, videoclips, TV programs and documentaries, among other formats, for televisions such as ARTE, TVE, TV3, Canal+, FR3, ARD, ZDF, USA Networks and Calle 13. His last documentary, Sexo, Maracas y Chihuahuas, has been exhibited in numerous international festivals and nominated for the Gaudí Awards.

Concurrently, he has been director and host of the TV show Documenta 2 in TVE, adviser of the network ARTE in TVE and audiovisual consultant for the Multimedia Dictionary of Contemporary Art of Centre Pompidou; associated producer and director of production; executive producer, scriptwriter, curator of documentary screenings and coordinator of conferences and publications; in addition of participating in
audiovisual markets, conferences and imparting courses in numerous universities; he was president of DocusMadrid (association for the promotion of the documentary) and member of the Platform of Spanish Cinema and the Spanish Coalition for Cultural Diversity.